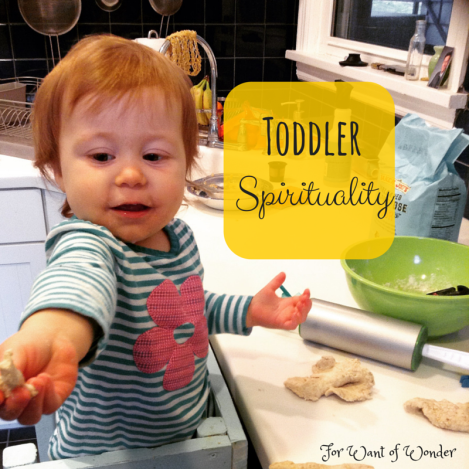 In my last post, I alluded to the struggles we’ve been having with Lucy’s behavior. Now, I’m well aware that it’s normal toddler button-pushing and angst, but we’re still parental noobs, so keep that in mind as you experienced parents laugh us and our intensity away.

One of the more frustrating aspects of the toddler psychological profile is the tendency to heed the parent’s command for a brief two seconds before recommencing the undesirable behavior. It’s a little game to them, though they don’t even know it: listen to Mommy. Remember it’s more fun to do what she asked me not to. Do it. Listen to Mommy…annnnd rinse and repeat. Obviously, it’s a game they win. I mean, not that the parents don’t try to win, but almost any adult who’s interacted with a 1.5 year old knows that a battle of the wills doesn’t get anyone anywhere. So we try, again and again to stop the naughtiness, only to have it rear its ugly head the moment we turn our backs (or not; the toddler knows no shame).

I realized, while pushing down the anger and frustration over Lucy’s inability to control herself once again this weekend, that spiritually speaking, I’m very like a toddler.
“That’s wrong. It will hurt you,” says God.
“Ok, I’ll stop,” I reply.
Two hours, two minutes, or two days later…guess what?? There I go again. The same sin, the same struggle, the same lack of self-control. And I’m an adult, fully rational, and very well-formed. Lucy can barely string together two word sentences. I’m fairly certain that God doesn’t rant and rave or even huff in disgust when I (again) do what He’s expressly asked me not to do, for my own good. And at the same time, He doesn’t lower the standards just because I’m not exactly meeting them.

What I’m saying is, I can read parenting advice books and blogs till the cows come home, but there’s a pretty great blueprint of how to discipline that’s been around since the world began. I can find it in the grace of the confessional, and in the story of redemption played out over and over in the Bible. Hopefully, I can remember it better when my toddler scratches the baby again, throws food on the floor again, and so forth. The path to perfection is a gentle slope, and we’re all a bit like toddlers, stumbling our way up it to the merciful Father.