Leila Lawler is suggesting showing shots of our gardens-in-progress for today’s link-up, and so that’s what I’m gonna do! I also feel that I need to capture the garden in its as-yet still untouched growing glory– I know the deer are watching and waiting to devour and ruin our work. They’ve lobbed off at least 5 beautiful little bush bean tops, but some of them have bravely started re-growing. And then my dad lent us some super-smelly anti-deer spray, and (fingers crossed) it is working (so far).

Let’s start with the front bed, right below our dining room windows: 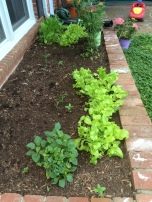 What you see is a TON of lettuce, that we originally planted WAY long ago (I think like early March!) as a cold-weather crop. It survived the randomly super cold spring, and we have much more lettuce than we can eat at this point. The empty spot at the end is where we planted our butterfly/bird flower garden (a mix that will hopefully attract lovely things like hummingbirds, finches, butterflies, etc.). There’s a dahlia at the end that our neighbor gave us, but those buds never seem to want to actually bloom into flowers. Maybe it gets too much sun??  Then an absurdly tall stalk of cilantro that requires assiduous pruning since it keeps wanting to bolt and seed. But at least we have fresh cilantro this year!! We also got two pink hydrangeas from Aldi’s for $10 each, which was a steal, and one of these days we (meaning Tom) will have a few seconds to dig up the clay-ey soil right in front of the bed, and plant those and mulch around it. So far, they’ve seemed pretty happy  in their pots though, and have bloomed considerably since we bought them.

Next, the raised beds: 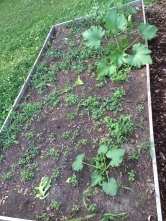 Oh look, a TON of weeds, 3 squash (of the 8, I think, Tom planted) and then 3 volunteer tomatoes! Hooray for volunteers! We will put actual tomato seedlings in the empty (well, except for all the dang weeds) space in the back, and maybe some heat-tolerant spinach underneath, shaded by the tomatoes. We’ll see. 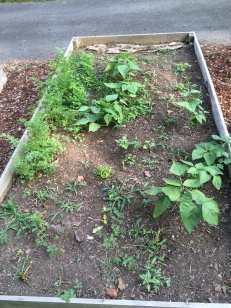 The next bed has bush beans, 2 rows of them, and you can see in the close-up that they will be multi-colored, some purple, some green, which will be really fun! Then a bunch of carrots, which may or may not survive being consistently pulled up by Lucy before they’re ready.

The last little bed is just cucumbers, and hopefully, they don’t get demolished by deer like last time. (Also, what the weeds! We reallyyyyy need to weed. And we really do not have time! All that rain has made our lawn/weeds/invasive crazy vines just take over our yard and gardens).

And of course, we’re still growing these: 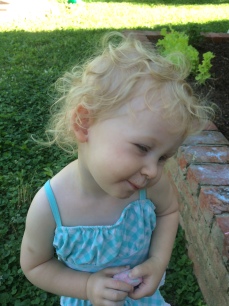 (I can’t believe how much Maeve has started resembling Tom of late. Is that not his face, right there, in miniature (and on a girl baby?))

I tried setting up the sprinkler for the girls last week when it was blazing hot and thought that this year they’d both finally be into it (Lucy was a little timid last year, while Lena put her face right in it and loved it). Surprisingly, Lena was TERRIFIED of the spray of water and screamed, “IT’S WET!!!” in the most surprised, injured tones every time the water touched her.

Preparing for the sprinkler to pass over…

…andddd reaction. Lucy smartly turns head away, while Lena screams right through it.

So, I guess we’ll have to dig out the kiddie pool.

Hopefully, I will be back soon with something other than pictures and captions. This week has been particularly cuh-razy as Tom is both wrapping up his school year/grades/summer camp prep AND starting grad school that is over an hour away, four days a week. The kids haven’t seen him very much this week, nor have I really, but next week he should be home more in the mornings and early afternoons, and (please, dear God!) I’m hoping Maeve will start napping better (or at all, really) during the day too. Feel free to send up any prayers you want to for us during the late afternoon or early evening witching hour/dinner/bedtime…doing it solo with all three is no joke! However, I really can’t complain, as military and medical residents’ wives have it so much harder. Teach me your ways, brave women! (Seriously. Leave me advice if you are one!).

Hope you have a wonderful, non-humid weekend!

My mom pretty much supplies any of the matching clothing the girls wear and it’s always fun to dress them in those outfits. But it’s pretty difficult to actually get a decent shot of them together with Lucy not screaming, “CHEESE!!!” and causing Lena to look in her direction…so here’s what we got:

Lucy loves saying, “We need to take a picher of this!” whenever she is doing something she thinks is cute. Holding her baby dolls was one such occasion.

Well, I’m stealing this from Instagram, but I mean, it’s too good. This is what happens when you’re nursing the baby and the toddlers are on the other side of the car, where they know you can’t see them, and where the ever-tempting garden beds lie. “We’re pouring dirt on each other’s heads!!!” they called with glee. Let’s just say the showers we had to give them afterward were not well-received.

I’m not doing so hot with Maeve’s virtual baby book, but I am determined to get something down, before all the little things she does become distant, forgotten artifacts in my mushy mom-brain.

So, maybe just a wee bit of catch-up on her milestones (AKA the things only a mom could possibly ever want or need to record and remember, solely so she can compare/contrast all her babies’ milestones…):

Lifted her head up from lying down: 2/3 weeks (fuzzy already, see?! Should have written it down before!)

Rolled from tummy to back: 4 weeks! Earliest one so far!

Started scooching backward: right around 8 weeks. And I mean, she can scooch! She pretty much has near-suicide attempts during every diaper change as she blasts herself backward towards the edge of the table.  She also can now turn herself about 180º on a flat surface just from scooting with her heels.

Grabbed/batted at hanging toys: 2.5 months. She’s really into her play gym these days and will concentrate on grabbing the toys and rings for a pretty good chunk of time.

Loves to watch the family as we do anything and everything around her. She basically cannot nurse when anyone else is in the room because she has major FOMO.

Is the smiliest baby! If you merely catch her eye she breaks into a huge, wide-mouth grin and will often gurgle with joy at being noticed (third-child syndrome?)

Is extremely talkative! She loves to coo, gurgle, and basically chat with anyone who will give her attention. So cute.

Loves getting changed, probably because it combines two of her favorite pastimes: scooching backward and smiling/talking to someone.

Does not nap very well (FOMO, see above).

Is about to grow out of all her 3-month clothing and size 2 diapers.

She got sprayed with milk but slept right through it!

We love you, little smiley face!